The Big Five Animals In Africa

When you start planning a safari, one of the most repeated terms in marketing materials is the Big Five. Sometimes, lodges or parks will claim that they are home to all five of these animals. Although seeing them is surely interesting, there are other animals not considered part of the Big Five that I personally love like giraffes, cheetah, and zebra. But who are the Big Five and what makes them special?

Who are the big five?

Fun facts about the big five

Who are the Big Five?

The term “The Big Five” is believed to have been coined during the times of the great hunting expeditions when royalty, the wealthy and celebrities descended on the African planes in search of the most feared and hardest to hunt for animals on foot: lions, elephants, buffalo, rhino and leopards. Being able to hunt the Big Five was a rite of passage for the hunters.

Fun facts about the Big Five

1. The Big Five Exist Across Many Countries

Did you know that there are 11 countries in Africa where the Big Five can be found? That is Botswana, Zambia, Uganda, Namibia, Ethiopia, South Africa, Kenya, Tanzania, Zimbabwe, the Democratic Republic of the Congo and Malawi. They are all the main safari destinations in Africa and they all have notorious parks known for their wildlife density and fantastic game viewing opportunities. 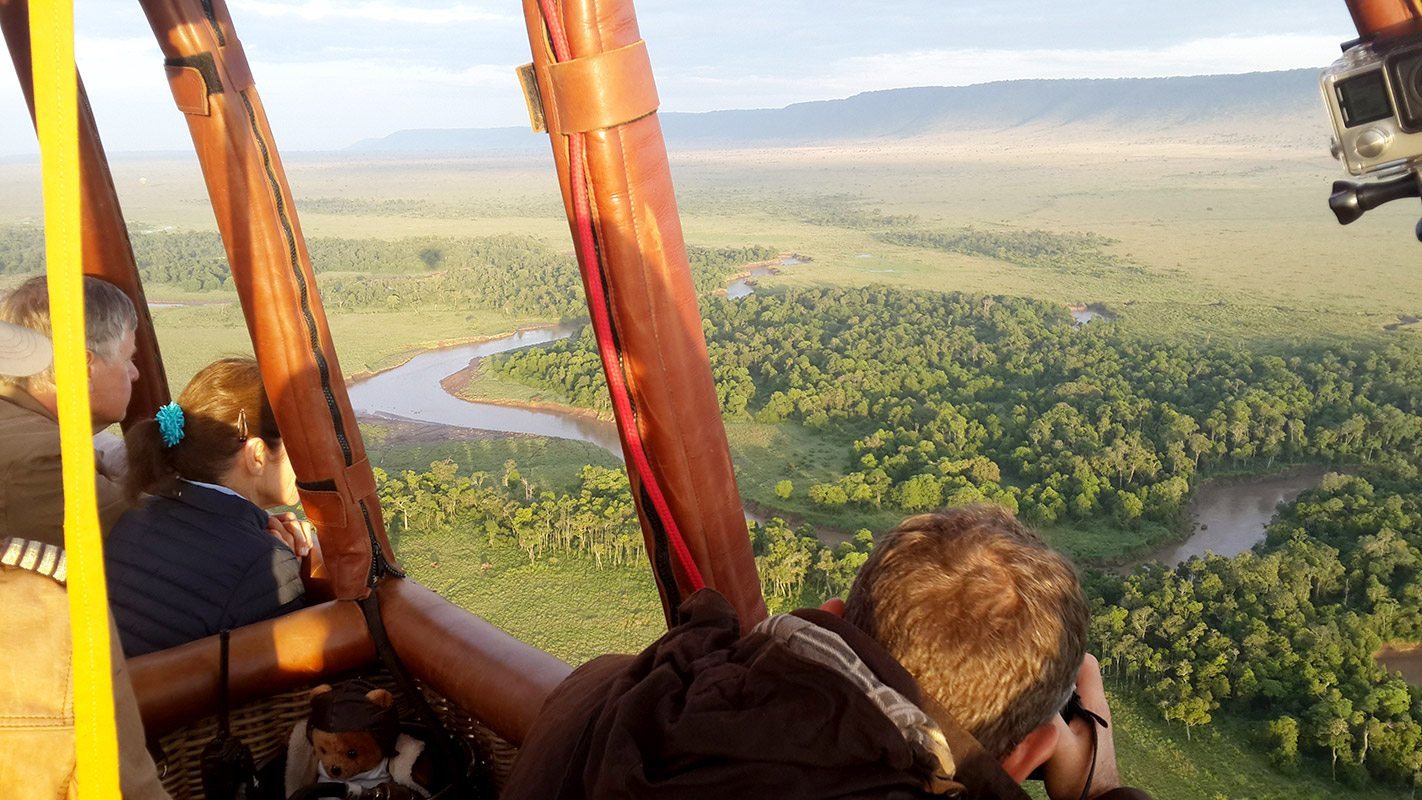 Shadows of wildlife from a hot air balloon safari

2. Show me the money

The Big Five is such an important marketing concept in Kenya and South Africa that the banknotes feature pictures of the five animals on the different denominations.

Although hunting has been banned in countries like Kenya since the 70s, it has been a massive business in a lot of other countries like South Africa where hunting is allowed in private game reserves. Some other countries, like Zambia, has lifted the ban on leopard and lion hunting as recently as 2013. After the killing of Cecil the lion in Zimbabwe, the entire discussion about trophy hunting was reopened again with much being said for both sides.

Lions after a kill in Masai Mara

The price for a trophy hunt is directly correlated with the endangered status of the animal. While a lion hunting license can amount to between $8,500 and $54,000, an elephant can fetch up to $60,000 and the near endangered white rhino can cost upwards of $125,000 according to the new York Times.

Although the label “Big Five” refers to the difficulty and danger in hunting these animals, they do not all enjoy the same level of conservation and threats to their existence. Of all of them, black and northern white rhinos are the only critically endangered species. Lions and elephants are considered vulnerable, whereas leopards and white rhinos are classified as near threatened. Finally, buffalo are the easiest to still hunt for, as their status is of least concern given numbers. Poaching threatens all of the Big Five.

5. Essential for the circle of life

Elephants are so important in the bush that one-third of African trees rely on their digestive tract to germinate.

The most admired and powerful of the animals in the bush, lions are the King of the Jungle. They are one of the most featured animals in movies from The Life of Pi to The Lion King and the main character in books like Born Free or The Jungle Book. Lion in Swahili, Simba, is the only Swahili word most children would recognize.

Lions are one of the only social animals in Africa. They live in prides of up to 15 lions. Once they reach maturity, young lions will leave their pride and find a territory for themselves and a lioness. Lionesses stay in the pride and take care of each other and the young one. Each pride will only have one mature male lion. You will rarely see an old lion as they either die of wounds from hunting or because of fighting with other lions. Lions mate continuously when they are in heat, doing it up to 300 times in just a few days.

As they do not have natural predators other than each other, hunting is most threatening to them. Lion cubs can however be killed by other older male lions, hyena or leopards.

One of the most majestic and beautiful animals while on safari, elephants are as mesmerizing as they are large. The largest land mammal, elephants can measure up to 3m and weigh between 6-9 tons. Their ears alone can be 2m wide. Their trunk has 40,000 muscles and can be used to eat and to hold, or as an extra hand. Their trunk’s strength is incredible. Given their size and the inefficiency of their digestive systems, elephants need to eat up to 300kg of leaves, branches and bark a day, which means they will undoubtedly be seen eating all the time. They also love to throw sand all over their bodies to protect themselves from the sun.

Like lions, elephants are also very social animals and females are the ones that take the lead. Individual animals rarely stray from the herd and large herds of up to 100 animals can be seen across Africa in what is an incredible sight. And what is more adorable than a cute little elephant?

Elephants can be found in large herds in Amboseli National Park, Kenya, in Chobe National Park in Botswana where there are believed to amount to 70,000 and in Zimbabwe’s Hwange National Park which is home to 120,000 elephants.

Buffalo look docile and peaceful but are believed to the be the most dangerous of the Big Five when agitated. They are also vengeful and are known to attack someone who injured them, even years after the fact. They are also incredibly strong and capable of tipping a car over.

Given that they eat a lot of grass, they need water to digest it and therefore cannot be found in desert habitats.

The most endangered of the Big Five, rhinos are prized in Asia for their horns. Each rhino has two horns and they are mostly killed for them. Of the many species of rhino, the black rhino and the white northern rhino are the most endangered. There are only four of them existing in the world, all of which live in Ol Pejeta conservancy in a protected semi-wild large area that is continuously under surveillance and protection. The white rhino gets its name from the Dutch word for wide (wyd) which was misunderstood for white and not from its color. Rhinos can run fast, up to 40km/h and are often found covered in mud which acts as a way to keep cool and as sunscreen. 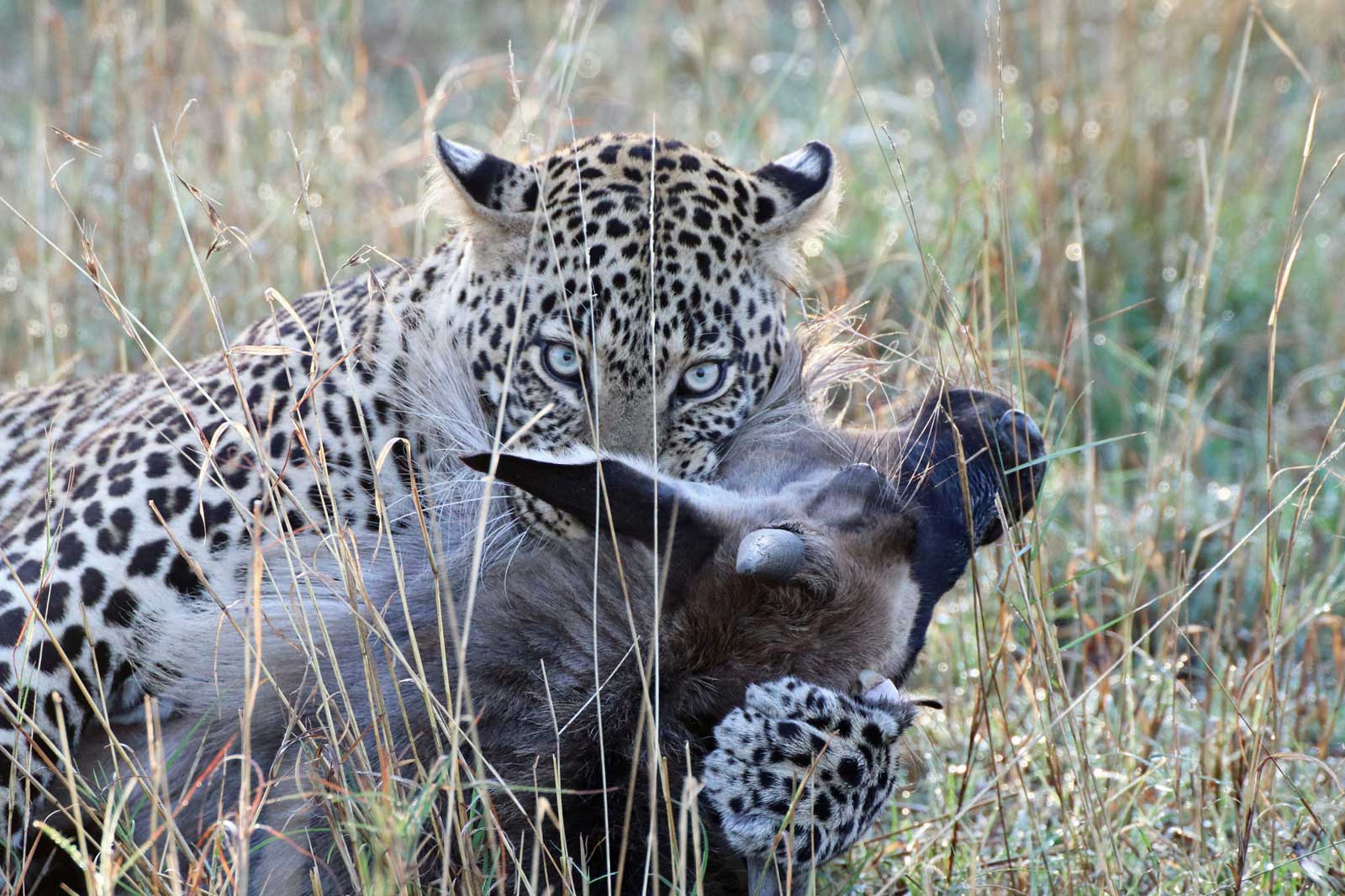 The most majestic, elegant and beautiful of the wild animals, only matched by the stylish and sleek cheetah, leopards are the best stalkers and predators there are. Solitary and nocturnal, they hide in the treetops during the day. They are large and strong, able to carry an entire impala or zebra (weighting a few times their size) up a tree to preserve it from lions. Their spots are adapted to the vegetation of the area they live in, being more squared in Southern Africa and more rounded in the East.

Leopards are as shy as they are skilled. At night, they follow their prey in complete silence, only their eyes visible in the dark, until they are really close. They then jump on it and kill it fiercely.

Contrary to what you may think, leopards are cats that love water and they are strong swimmers and fishers.